This past weekend I was lucky enough to attend SQL Saturday Los Angeles 2022. This was the third SQL Saturday I’d been to in LA, and it was once again at Loyola Marymount University, which is a just north of the airport on a hill outside Marina Del Ray.

It was a beautiful day in LA, and as I drove up in the morning, I decided to walk around campus a bit. It must be a wonderful place to go to school, and as I came over to the event building from the back, I saw lunch tables set up outside for people. 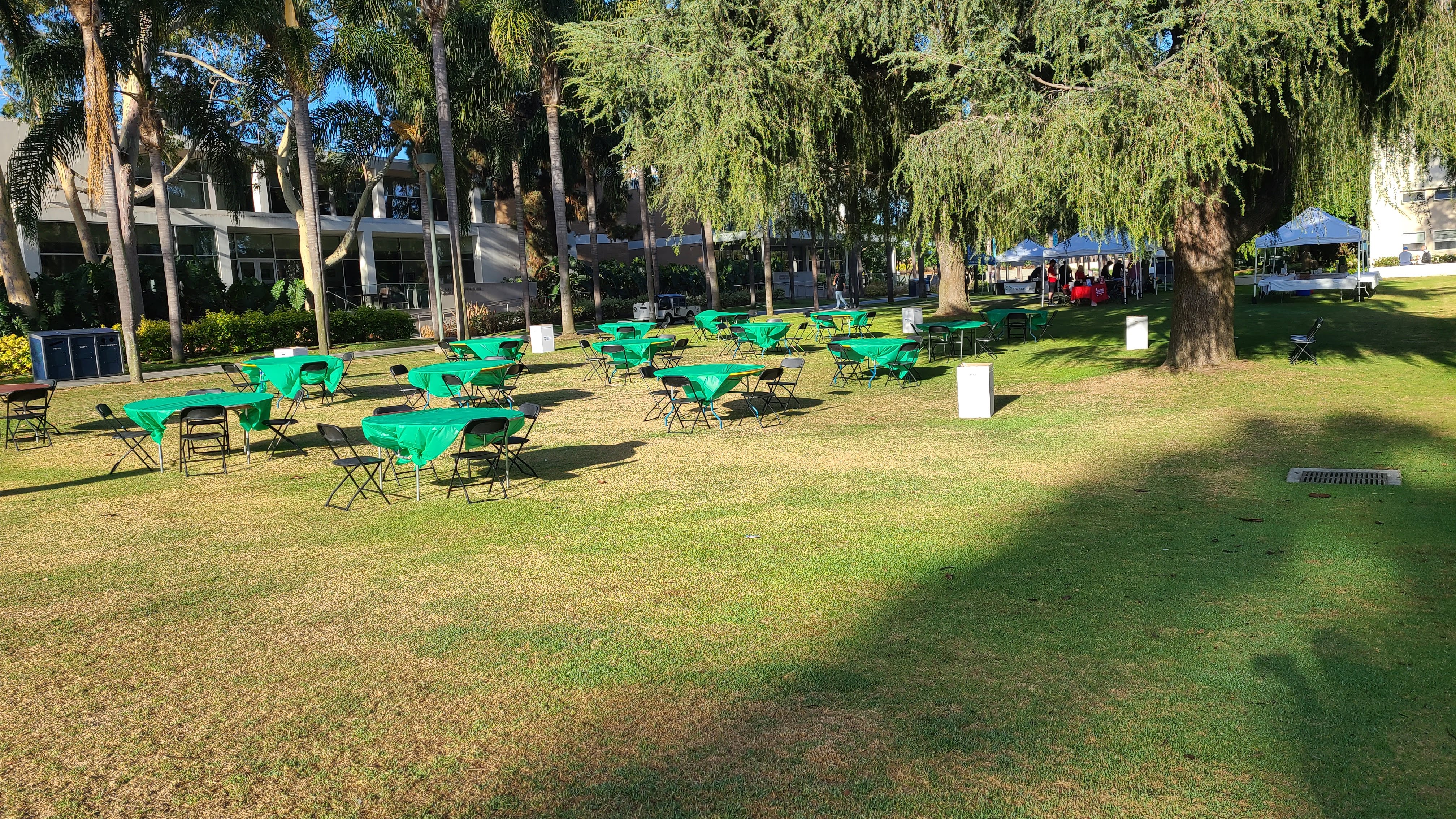 Since it’s LA, quite a bit of the event is outside. Registration was in its own tent, with a sign on top and attendee badges sorted in a stand. This is one thing that I think can help other organizers, as badges in a pile or laying out on tables can be mixed up and moved around. 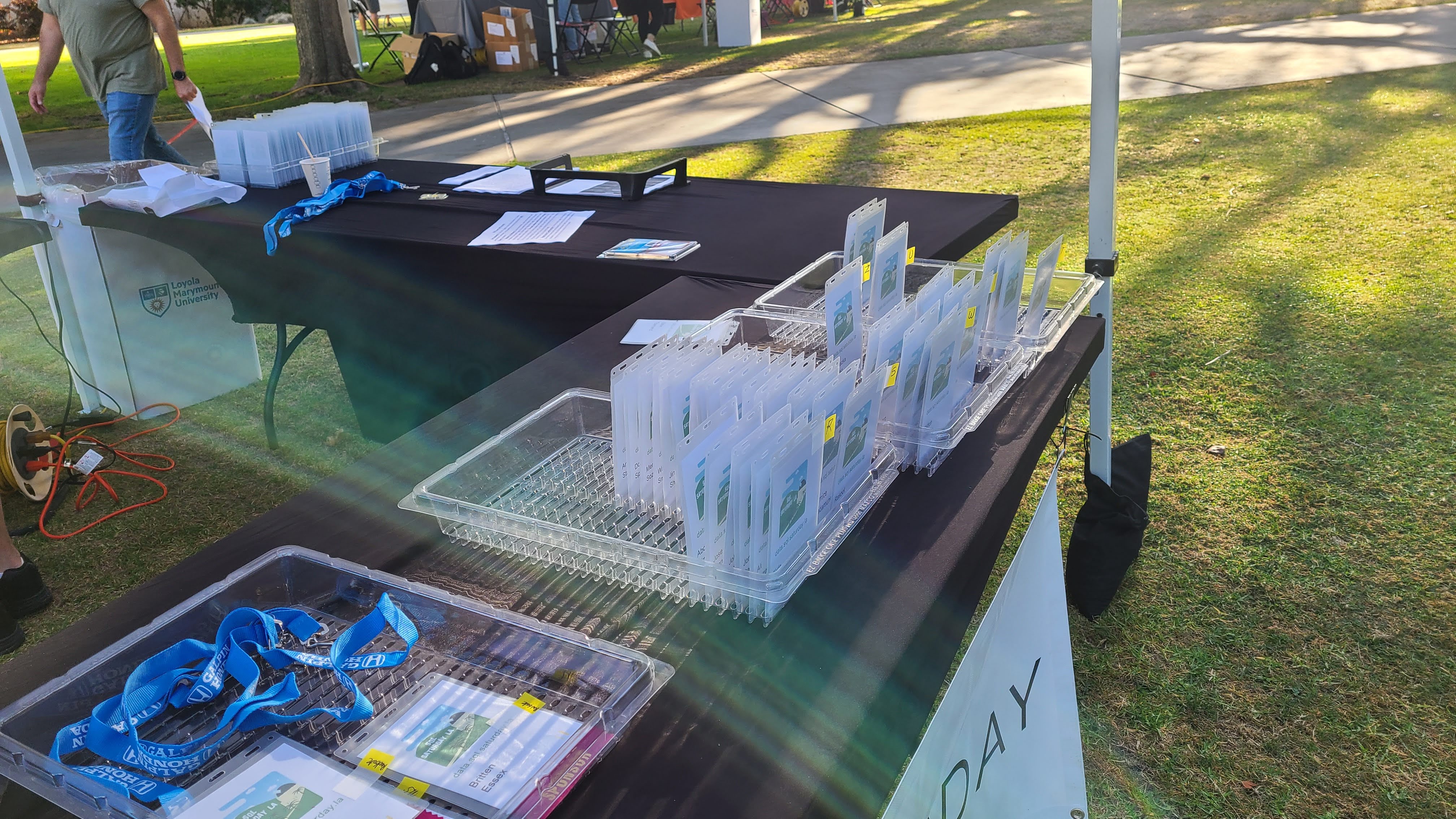 There was also a printer available if anything needed to be redone, which is always a good idea. 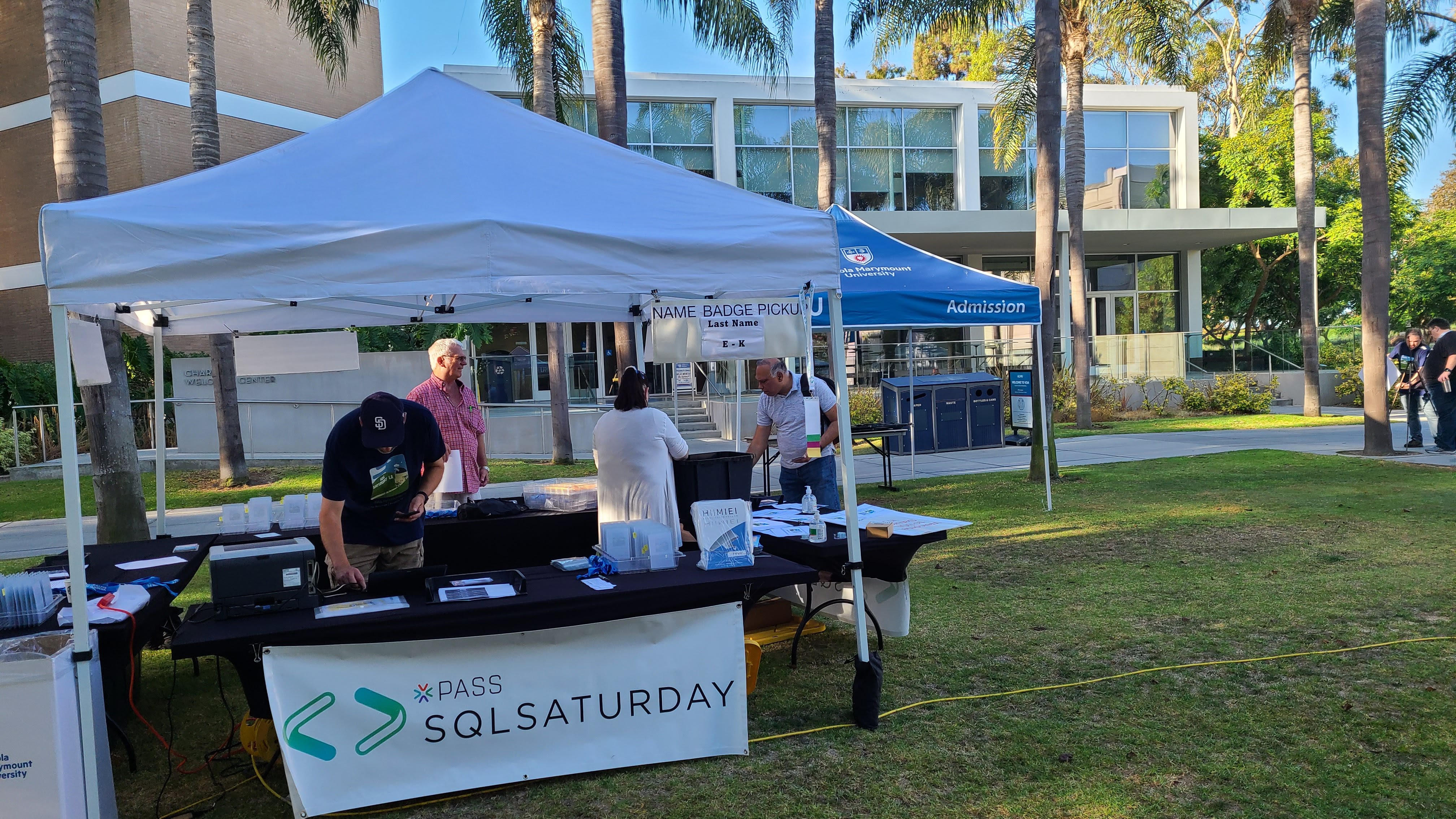 There was evena Social Media tent with a few volunteers taking pictures throughout the day.

The day starts slowly in LA, perhaps because of traffic, but there were only a few people there when Anna Hoffman and I started the opening keynote. I had a few brief remarks on SQL Saturday and then Anna talked a little SQL Server and Azure, which is something she does often for Azure SQL.

The sessions were in three classrooms on the second floor of the building. Each has a nice tech setup, as this is a college. The rooms are bright and airy, windows open, and school desk setups. Here you see Anna delivering a talk it the first session.

One thing the organizers did was put up session titles outside each room with the times. This is really handy when a crowd of people are in the hallway. Anyone walking by, even behind others, can see this.

The audiences were a mix of professionals from all ages and technologies, but they asked interesting questions and were engaged in talks. Jeff Iannucci had the audience entranced with his talk on Execution Plans.

There were nice breaks between sessions, 30 minutes, which gave people a chance to walk outside, see vendors, and get a snack. You can see vendors set up in a line outside, and a tent with snacks and coffee throughout the day, with lunch placed on the same tables.

Most of the people stayed the entire day. While it was a smaller crowd than years past, it was an engaged one. Quite a few people expressed how nice it was to meet in person and learn something. I am hopeful that 2023 and 2024 will see continued growth in all events.

There were plenty of volunteers, including a few cute fun ones that watched the speaker room and brought water to the rooms to presenters. I got a selfie with a couple of them.

The raffle was entirely an e-raffle, with attendees scanning QR codes at each booth and entering information on their phones. I don’t know that I like this, but I helped give out the prizes at the end and it was simple to read off names from a SQL Server database. Order by NEWID(), of course.

Remind others to register here: http://eepurl.com/hwVBKn